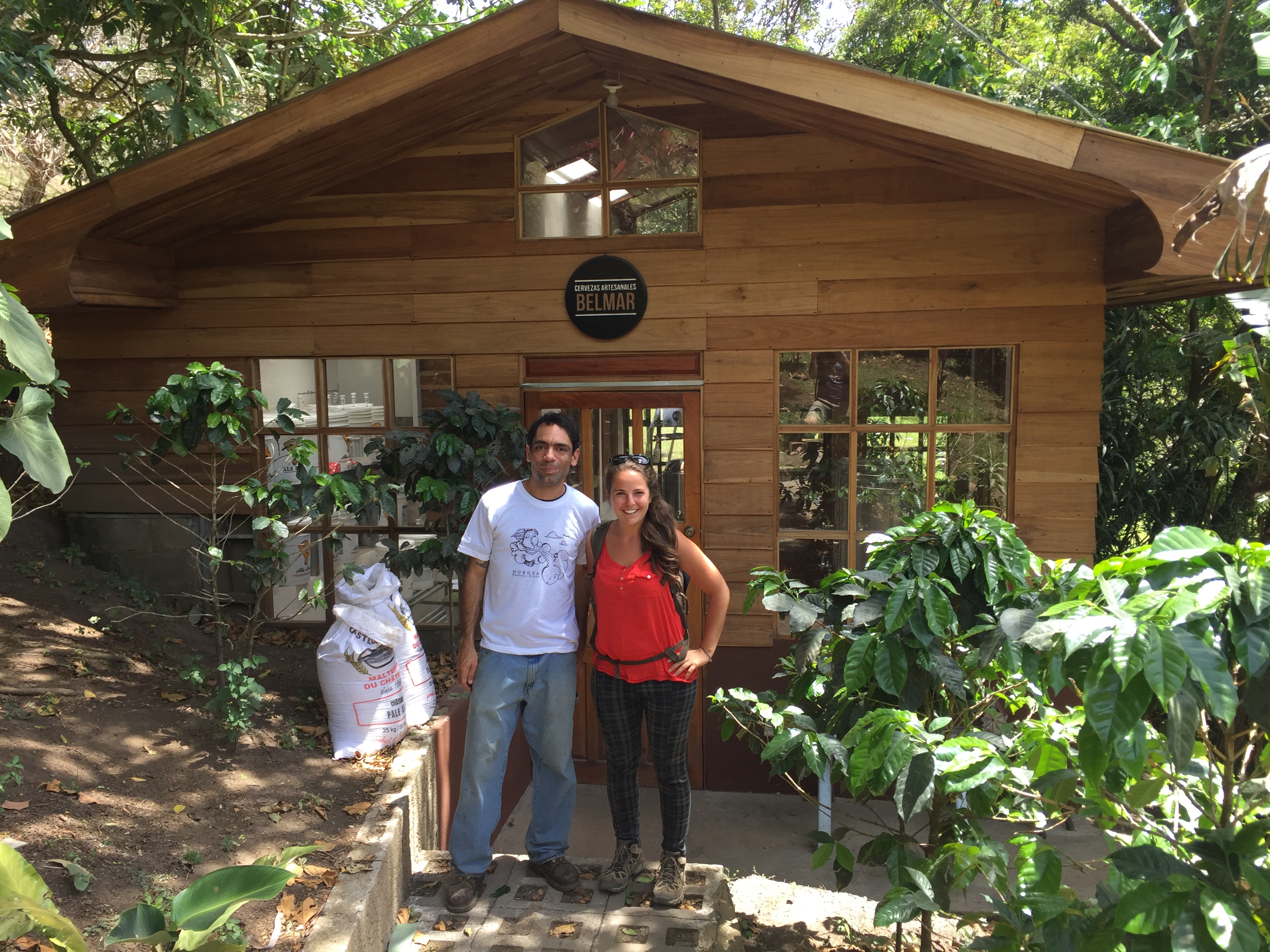 On my way south, the next country to pass was Costa Rica: Country of National Parks and long, wide beaches. A diverse place in terms of flora and fauna but also a surfers’ paradise and therefore a quite expensive Gringo hotspot. It is windy and cold in the mountains; it is sunny and humid at the marvelous Caribbean beaches. Finally, it also is a developing Craft Beer country which is reason enough for me to write about it. But above all: It is Pura Vida!

I’ve already heard about a quite vivid Craft Beer scene in Costa Rica, centered around the capital San José but also well spread all over the country. Once, I entered the country I kept my ears open for domestic breweries on my planned travel route through Costa Rica but also took a closer look on which beers people are commonly drinking here:

Imperial & Pilsen
What would one do after climbing a volcano? Probably, you would reward yourself with a cold and refreshing Imperial or Pilsen. The local beers that meet all your needs in such cases are produced by 1908 founded Florida Ice & Farm Company in the province of Heredia. And those two beers are obviously leading the market: Pilsen, being the stronger, slightly hoppier option, Imperial, the maltier but little lower-in-alcohol option. Both are light lagers that you can find all over the country. But let us dig into Craft Beer:

In General
Costa Rica is a rapidly developing country in terms of Craft Beer. It is hard to believe that seven years ago there was still a monopoly on beer in the country, whereas five years ago, the first kind of Craft Beer Festival already took place. The festival was primarily showing products of Craft Beer aficionados presenting their homebrews and experiments to each other. In the meantime, the community has been grown. The Craft Beer Festival 2016 hosted about 30 Craft breweries from all over the country (about 15 breweries thereof having all permits and an adequate size to sell beer), welcoming approximately 500 visitors. In contrast to Nicaragua – where the few existing breweries are mainly owned by foreigners – estimated two thirds of all the breweries are locally owned in Costa Rica. The most popular styles of Craft Beers for now are certainly Pale Ale and IPA, whereas Stout is becoming relatively popular as well. According to a Costa Rican brewer I was talking to, there were also two sour beers to taste at the festival but no organic beer has been produced so far.

Also in Costa Rican beer production almost all ingrediens are imported. Hops mainly come from the US, some from Germany and Canada. Malt is mainly imported from Germany, the US and Argentinia. Regional fruits like papaya, mango etc. as well as cacao and coffee contribute to regional linkage. As mentioned, Craft brewing is concentrated around the capital San José but can also be found in some other locations. As I have been trying to avoid capital cities in the countries visited so far, I am really happy to have found some nice places on the countryside, producing Craft Beer onsite or selling Craft Beer from the capital. Just a few to mention:

…was one of the first Craft Breweries in Costa Roca, established in 2010. I had the chance to taste their Golden Ale „Libertas“ at Playa Domincal. The sun was scorching, I was sweating when I was only writing an email. So I decided to concentrate on an Iguana (pic below) that was just crossing the path next to my garden table and then to look out for some refreshment. I was lucky to find the following Craft that pleased my palate with a mild and elegant mouth feeling of tropical fruits: ripe oranges, papayas and also a bit of mango. Only a hint of bitterness and a complex, yet smooth and balanced body. This is great fun!!

Lago Arenal Brewery – Vulcano Beer with a View
At the picturesque waterfront of Lake Arenal in the north of Costa Rica lies Lago Arenal Brewery, as part of a Gringo owned hotel sharing the same name. Head brewer Mason produces several different styles one to two times a week. We were very lucky to meet him on a brewing day. What makes the difference here, is of course the water. A spring on the property just next to Vulcano Arenal provides the brewery with enormously rich, quite acidic water that makes itself remarkable through a slightly sweet taste. For now, the beer is not bottled and only sold in kegs – mainly exceptionally fresh in the own brewery or brought to some Craft Beer Places in the capital San José. The brewer himself is astonished by the recent Craft Beer Boom, describing it as an explosion of consumption and brewing of Craft Beer in Costa Rica.
As a former homebrewing US citizen, he found a new love in Costa Rica and a good working opportunity at Lago Arenal Brewery (formerlly called Vulcano Brewing) only four years ago.

As mentioned, Lake Arenal Brewery is also providing an onsite bar/restaurant and a hotel offering all beers from tap – every customer gets free tasting sips before deciding on a beer: Pina Blond, Chili Birra, Paradise Pale Ale, Jungle Dunkel, Black Ash Stout. My favourite was the Chili Birra. In short: cloudy, orange colour. Earthy notes and lots of paprika in the nose. Perfectly integrated chili on the palate, being modest in the beginning, it finishes with a markedly spiciness. Accompanied by distinct biscuit, it is really well balanced.

If it is not for the beers (maybe you’re traveling with someone who is not sharing your passion for Craft Beer), the hotel is worth visiting anyway because of its amazing lake view, calm surroundings and decent climate in the area.

Cervezas Artesanales Belmar – Monteverde
Monteverde Cloud Forest is one of Costa Rica’s most popular National Parks but also famous for its coffee. It is situated in the northern part of the country. Two small villages – St. Elena and Monteverde – serve as the basis for nature loving visitors likely to experience jungle atmosphere, glimpsing national bird Quetzal, drinking delicious coffee or – as I did – taking part in a brewery tour at Cervezas Artesanales Belmar. Having turned into a professional backpacker in the meantime, I certainly could not afford staying at the hotel, but after gathering my Colones (national currency) I at least decided to invest into a brewery tour. And I have not regretted my decision as head brewer Roberto Saenz was particularly friendly in showing us around his litte – let’s call it brewery hut – telling us about his work and the Costa Rican Craft Beer scene in general. This was only topped by a food/beer pairing provided by the chef and made of onsite garden grown ingredients.

What makes the difference – again – is the fresh, unfiltered water coming from the nearby Cloud Forest. At the moment there are three beers „Aurorae“ – Pale Ale, „Dos Mares“ – IPA and „Nubosa“ – Tropical Stout.

Brewing has only begun in 2014, since 2015 Monteverde beer is being sold. 50:50 bottles vs kegs as most gastronomies around do not have tap systems yet. I like the beers – they are very individual, though clear and focused. They perfectly show what one can achieve with rather little resources, but let me take you on a small picture tour…

IPA presents itself in a dark, cloudy orange. In the nose one can find a lot of herbs but also vanilla and strawberry, reminding on Gummibärchen/jelly. The body is rather light, yet really refreshing and ending with ripe fruits and charming long herbal bitterness. The Tropical Stout is dark brown and cloudy. It reminded me on vanilla, slightly roasted coffee and sugarcane. Again, this is a quite refreshing, light bodied beer with a rather long finish. I associated it with a nice, cold filter coffee – this might sound weird, but coffee aficionados will know why I adore it.