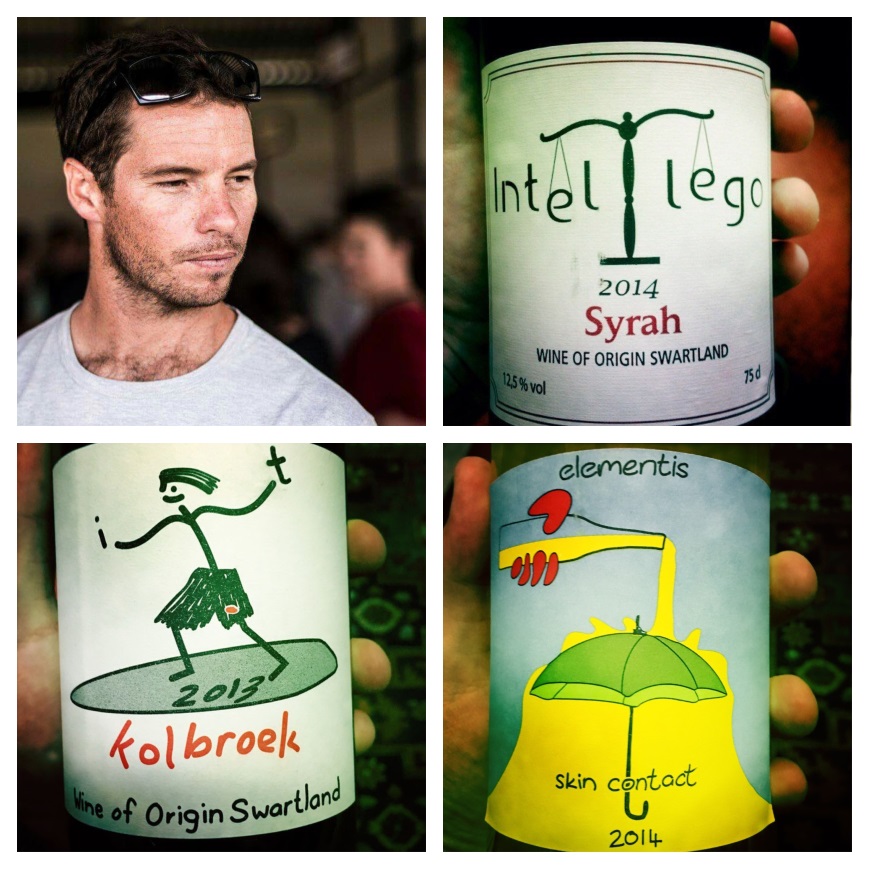 During my time in South Africa I had the pleasure of meeting a lot of wonderful, smart, hard working and of course fun people. What originally brought me here was my affection for the Intellego Chenin, as I already mentioned in a former article. Before my time in South Africa was over I spoke to Jurgen about… well mostly wine, of course. We talked about the Swartland, passion, abroad experiences and lot’s more. I am happy to introduce you to Jurgen Gouws from Intellego.

His interest in wine began in Boland, where he had spent his school dazs. It was the diversity thatnot the same. I come from a region where they harvest citrus and the bug never bit me. I tried it for six months and realised this was not for me. You harvest for seven to eight months a year and in between you do a little bit of pruning. That’s not as exciting as vines. It’s more diverse.“

Since he decided to study wine he has never regretted his decision. He knows he is lucky that he found his passion right away, „I think it’s the best job in the world. You get to travel, you get to know new people, you always keep learning.“

If you’re lucky enough to know his wines, you can feel his affection for France. It comes as no surprise that he did some harvests there. „I was quite a lot in France. The longest I’ve been was in Cote Rotie, I worked there for seven months. I also had two harvests at Matassa and I worked in Languedoc/Roussillon for one vintage.“

France is not the only country he has worked in though; he did two harvests in Russia, one in New Zealand and one in Spain. Still, if he had to choose where to make wine outside of South Africa he would go for the Languedoc/Roussillon. „There is a lot of similarity between the Swartland and Languedoc/Roussillon if you look at the climate and varieties.“

But the Swartland is always first, of course. „I love the West Coast for numerous reasons, of which one is surfing, but there is a lot of potential, for example in Darling. I feel wine wise in South Africa there is still so much to  explore“

Natural & Down to earth

Now that he is making all natural wines, it’s hard to imagine him working for a big cooperation. Well, everyone has to start somewhere. Many experiences have shaped and changed his mind with regards to wine and how he makes it. He told me about two: „I’ve visited Burgundy for only two weeks. It was amazing. I think that kind of changed the way I thought about wine. You really meet people who are passionate about wine and about what they are doing. The sommeliers actually know a lot. Also when I worked with Eben Sadie in Spain in his winery (Terroir Al Limit). I am thankful that he introduced me into a lot wines. It was amazing, sitting together drinking wines I couldn’t afford and didn’t know. And in the end to see how winemaking for them was not only a job but a lifestyle they enjoyed.“

Even though he knows people like his wines, which the demand of his wines abroad proves, he is not yet content.„You always try to improve and you always get to get better. I think people like my wines because they have personality. It says something about me and it’s not just a product. In the end you have definitely a fingerprint of myself on the wines. But the moment you stop questioning yourself is the moment you loose passion and the product suffers.“

Right now there are six wines in Jurgen’s portfolio. Which one does he like the best? It seems he doesn’t have a favourite. I cannot blame him. „It’s like having six children. Everyone is different but I love them all the same. There is a wine for every occasion.“

The look & its reason

The Intellego Label shows a scale, which is not quite even. It was his first label, for his first two wines: Chenin Blanc & Syrah. „Basically it’s all about the equilibrium. For me the equilibrium between human and nature is never balanced, is never perfect. It is either to the one side or to the other. We always talk about balance in life but we can never make it perfect. That’s why the scale is a little bit more to the left. „

The Chenin Blanc Skin Contact, the Kedungu (Mouvedre) and the Kolbroek (Syrah, Grenache, Mouvedre) are the newest wines in his portfolio. „I was thinking I should have a different label for the funkier wines. In the Kedungu and the Kolbroek you can see the scale in the man. I wanted to make it more fun and ironic, as in the Skin Contact. The Syrah and the Chenin are like the parents and then the others are like these wild childs running around, which are allowed to differ every year. „

„I want to get some cuts of Frapatto. It works in Sicily, there is no reason why Frapatto can’t work in this country. That’s one of my missions.“

All the way along his travels it seems that Jurgen was fortunate to meet people who shared their knowledge and passion. Now he wants to give some of that back to young wine lovers, winemakers and sommeliers. Thank you for that, by the way. „The best thing about wine is: wine brings people together. You can see that on every wine show and wine fair all around the world. I also think it’s all about sharing. That’s why I am so fortunate here. When you look at the Swartland Independend Producers  (SIP),people like to share and help. You’ll never feel alone.“

„My advice for young winemakers? First of all you have to do it for the right reason and then you need to have a passion for winemaking. Because if you don’t have a passion you will always have the same wine as your neighbour. It will just be another wine on the shelf.  Probably the most important thing of all is drink as many different wines as possible. Yes, drink and travel. While you’re young drink and travel as much as you can.“

And some more information you always wanted to know

If you were a grape variety which would you be?

I’d say maybe Syrah because winemaking -wise Syrah it’s quite reductive and shy in the beginning but then with time it opens up. I think when I meet people for the first time I am quite shy and need some time to get to know them. Syrah is not too complex and I think I am not a complicated person. And it got a elegant side and I think I’ve got a softer side to me (laughs)

Which wine would you drink at the following occasions?

With your friends on the beach after a surf.

Trousseau. It is like Poulsard but it is a bit lighter and less expressive which makes it easy drinking. Or LAM Pinotage 2013

Candlelight Dinner with your girlfriend.

The one with the highest alcohol so I can get her drunk (laughs). Just kidding. I mean women love Pinot Noir. But that’s boring. I think I would go for Grenache

Getting ready for going out.

A Bottle of Riesling from Elsass (shot out like a pistol)

After walking through a big pulsive city with friends.

There is no better sound than pulling a cork. It’s the way it is. I am a traditional guy. I like opening old wines see if the cork is alright, smell it, feel it. It just wouldn’t be the same with a screwcap

After Work Drink. Beer or Wine?

After Work in the summer: beer. Without a doubt.

Is there a food and wine pairing you still remember because it surprised you?

It’s funny but in 2009 I visited Priorat and I went to this restaurant meeting up with old friends. They were done with dinner and were drinking L’Arbossar 2004, Terroir al Limit from Priorat which is mostly Carigñan and Grenache. It’s a very dark wine from old slate soil, a really intense wine. For dessert we had kind of a chocolate brownie with olive oil poured over it. Supposedly that’s very traditional. I couldn’t imagine first but the wine worked really well with it. This was really interesting for me.

As you see, there is a lot to discover in South Africa. I would recommend to travel there and to get to know the people. No time? Other vacation plans? That’s okay. The good news is you can buy this traditional, shy and elegant guy’s wine in Austria. Check it out at Weinskandal. And don’t forget: There is a wine for every occasion so maybe you should try them all.